Greg, Scott, Terry & Freebie;  The day began at 7.30am with the boys from Turf Conditioning Services unloading in a heavy mist.  The long hollow verti-drain tynes were put on and the coring began.  With Terry loading the sand into the top dresser Freebie took charge of  that area for the first eight greens.  The cores came out well and showed our deep coring (2018/19) had  left clear layers of sand on the greens and that the roots were generally down 50 – 70mm below the surface.  Our greens’ program, (thanks Hugh and Rod) is certainly working.

A spot of mist about as we begin the September 2019 coring. 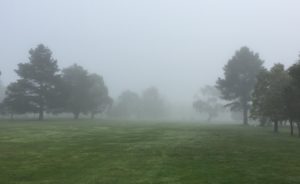 Scott, pass me the scalpel, this needs careful work. 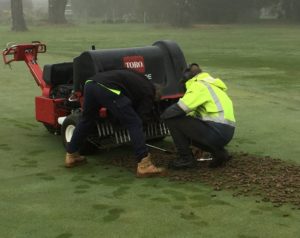 Greg clears cores on the 15th 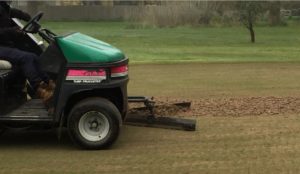 Ron, Bruce & Hugh.  This mob did their usual great job wandering along behind the top dresser and attending to each green.  The sand was a little wet so the 1st smudge was more of a smear.  Hugh and Bruce weighed and measured the seed and fertiliser and, with the help of  “Seed & Fertiliser Assistance Tool 42B” (patent pending), were soon busy on the greens.  After lunch, when the sun had had a chance to do a spot of drying, Ron went round again and the sand dropped into the corer holes far better.  Not to be left out Freebie and Bruce did a 3rd smudge at about 3.30pm and after their run there was far more sand in the core holes than on top of the greens.

Hugh waited for the extension to the 3rd to be completed before he seeded and fertilised it as well. 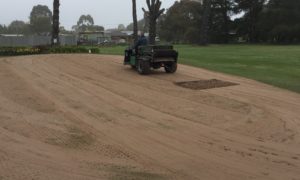 Tony, Scottie, Keith, Kev & Freebie.  The big one for our 2nd 2019 working bee.  Plenty of preparation work made this job a great deal easier.  On Wednesday the extension was marked out and a drain dug across the lowest part of the existing green, the new area of green was framed up and soil from the spoon drain was placed outside the frame, this was topped with lengths of  turf cut from the extension. The drain  went all the way under the extension to a pit well away from the green.  Two metres of screenings arrived on Thursday and we soon found that pushing it around took a lot of energy, time and will power but, after an hour’s work, we were ready for the sand.  Luckily Greg was still waiting for the last few greens to be top dressed so he happily trucked six loads of sand up to the new green.  Some was levelled off on the Thursday with the remainder pushed into place on the Friday.  Andrew Clement, with tractor, arrived to do a spot of earth moving  and he graciously carted up another metre or so of sand before heading off to attend to the spoon drain on the 6th..

After a couple of sprinklers were moved and following, much pushing, raking and smudging, the extension looked pretty good so the frame was taken out and the edges levelled to match the lengths of turf.  The roller was brought into action and the result was excellent.

Not much later Hugh arrived to seed and fertilise and Scottie set about fencing the new area off as GUR.  A great two and a half days work

The drain begins, once carefully replaced the blocks of turf provided the level for the new sand. 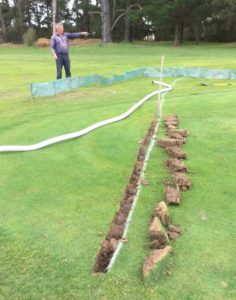 Drain almost finished, cut through the green and under the extension 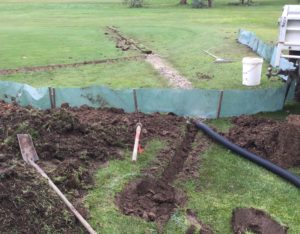 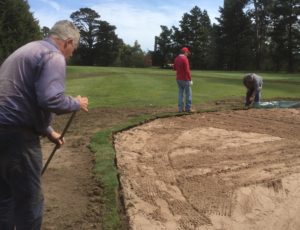 The roller smoothes out the bumps 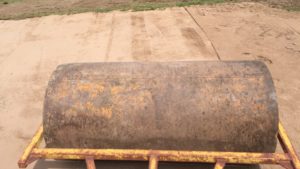 Hugh finishes the job with some seed and fertiliser 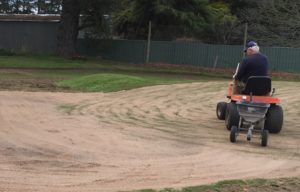 Tony, Freebie, Scott, Bruce & Andrew.  A few lengths of 100mm storm water pipe, some glue, a spot of trenching and some concrete cutting and the overflow pipe from the dam was safely in the large underground drain that runs E/W across Romsey Park.  Two covers from this drain were missing so 18mm of fibre-cement sheeting, with a strengthening wooden frame, was used.  Come Fri and Andrew set about carting soil and smoothing it into place.  Did a the usual amazing job before heading off to a wedding later in the afternoon.

The underground drain had to be cleared 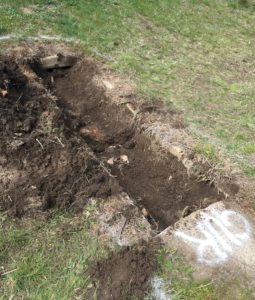 The 100mm pipe cut in and underground drain sealed 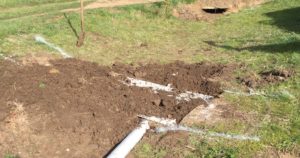 Andrew sets about filling and smoothing the spoon drain 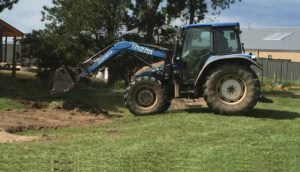 Terry.  For many years the 3rd has been the wettest green on the course.  After much discussion it was decided that, with the fall from the old track to the back of the green, we could cut a spoon drain in to divert water into the bottom dam or down behind the green and then on to behind the 4th tee.  A gentle spoon drain will soon grass over and the fairway mower will have no problems.  A laser level is a wondrous thing, add  a great little tractor and a rotary hoe; the drain was dug.  The wonderful top soil was pushed up and then moved around the 3rd green extension and to top off the spoon drain the 6th.

Terry works carefully but soon gets the job done 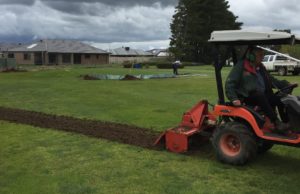 Chris & Lis; With Tony finding low areas or wet spots Greg dropped the cores and Chris and Lis  worked hard to level them into place. The roller finished the job smoothing the cores in.  In a few weeks these low areas will be beautiful, level green spots  on the fairways.

Chris, ready to head off and level those cores 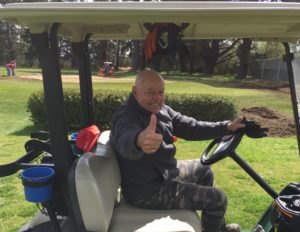 Loraine, Elaine, Wendy & Kath.  A very understated performance but one full of merit.  Great job you four, everyone was well fed and watered on both days.

Elaine feeding the multitudes on Friday 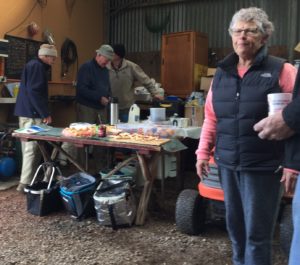 The Thursday team, what a bunch of wackers. 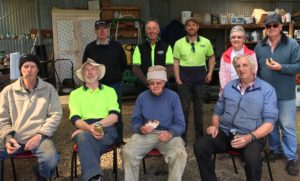 Wendy, Connie, Darlene, Roger & Kath. This job required a steady hand and a good eye.  Plenty of lying down and getting at eye level with the tee signs and walking around the hazards or up the fairways stopping and cleaning and painting the 200m, 150m & 100m markers 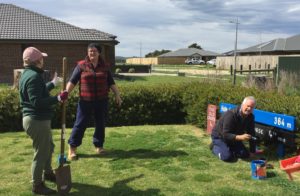 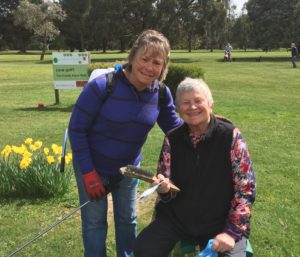 Kath finishing off the hazard markers 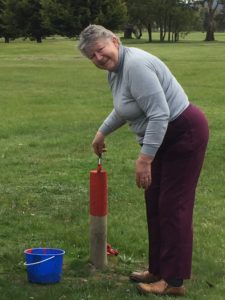 Bruce & Lorraine; The tee marker pavers were repainted and replace.  A job with little kudos but one that had to be done well.  Thanks you two.  Sorry, no pics

Garden behind the 1st

Tony. Work began in the previous week and the final lengths or “reo” were driven in late on the 27th.  Seven native, flowering bushes were planted along the drain behind the 1st.  The plants had protective covers placed around them and the whole area was heavily mulched.  The mulched area was framed up to hold the mulch in place and to protect the plants from mowers induced injury or ….. death

Plants almost in. Colours, from the outside in, are pink, red, yellow & pink 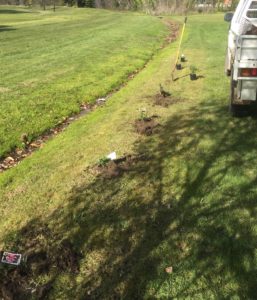 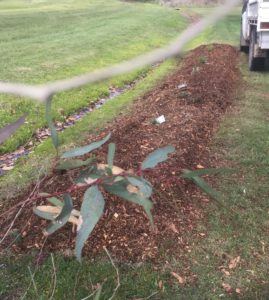 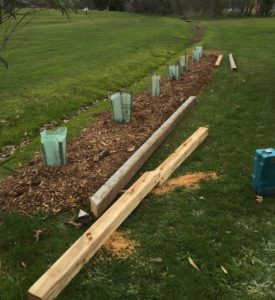 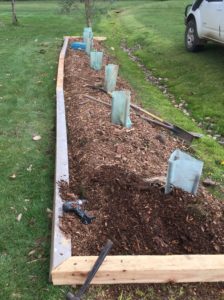 Bruce, Freebie & Ron.  with all those cores around the place it was the perfect opportunity to scarify them into some of the most “ordinary” areas behind the 7th and 15th greens.  Freebie had to do a spot of repairs to the scarifier but, while this slowed the boys down, it never got close to stopping them.  Another job well done by this hard working group.  (Combined age of about 215yrs)

Scarifying and seeding the back of the 15th 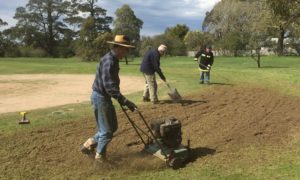 Levelling the “Clean Fill” on Nth of the 3rd

Terry.  A few months ago we were offered a few truckload of “clean fill” from the sides of Park Lane.  Turned out to be not exactly what we were looking for but still quite useful to level the area under the pine trees and make it easier and safer to mow.  A spot of rain will finish off the levelling and then the grass will grow.