Weather conditions were quite variable as the players teed off in the October Medal and the 2018 Medal of Medalists. Overcast skies were followed by patches of bright sunshine and there was a steady breeze from the SSW which kept the clouds moving.  The fairways and greens were in top nick so the day’s results were really up to just how well the game was played.  The Medal of Medallists teed off from the 1st and immediately there were some excellent shots, current club champion, Mick Squire, dropped a beauty onto the small green to eventually take the NTP on that hole.  As the round progressed it became clear that it was a battle between three players and  the final two holes proved to be decisive.  On a day when the clouds generally got the better of the sun the results were; 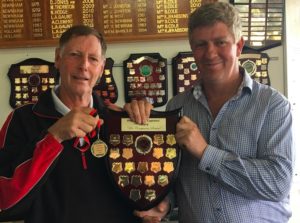 The club would like to commemorate the life of 1967 club champion John Mitchell.  John was a proud and much admired, member of the Mitchell clan, between 1955 and 1969 male and female members of the clan won 30 club championships.  John played in numerous pennant teams and was a member of the victorious  team of 1973 when RGC won the Inner Western District “scratch” shield.  John died suddenly in late October and was buried in Colac.