For the first time since March the temperature was scheduled to be over 30C.  The rain of last week was gone and the fairways were hardening up.  Hot, dry air and firm fairways promised good distance off the tee however, a strong wind form the N/NW made sure that players had to plan shots carefully or risk being pushed well off course.  Golfers who were able to keep the ball below the tree line were able to play more more steady golf.  The conditions saw all players struggle to play consistently with only a few being able to equal or better their handicaps.  The Final of the John Laing Shield was an up and down affair with both players getting a few in from before being pulled back to square.  It was not until the middle of the back nine that one player was able to draw ahead.  On a hot, blustery day the results were; 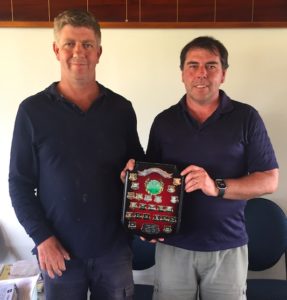