The 2018 DDGA Women’s  Pennant Finals were played at Lancefield. The course was in good nick with the usual fast greens and cover returning to the fairways.  RGC was competing in Handicap Division 3 playing Avenel.  The RGC team fought out five close matches to take the pennant.

Results on the day were;

Division 3; Romsey D Avenel – 3/2
The RGC women have won two previous pennant flags; 1978 in Central Highlands District and 1995 in Dalhousie District.
Many RGC members joined the victorious players in the clubrooms to celebrate the win.  There were four members of the 1995 winning women’s team – Hazel Allen, Leila Beasley, Shirley Shelton, Darlene Baker and Helene Newnham from the 1978 team.

Proud players who represented RGC during the 2018 Pennant Season 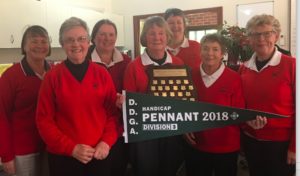