On a smashing day for golf, clear, sunny skies with very little breeze, all members rallied to challenge the leaders from round two.  The course had continued to green up and the greens were in top nick, thanks largely to the efforts of Hugh and Les.  In A Grade the shine had slightly gone from the two glorious first rounds Les Gaunt had played allowing current champion Michael Squire to steal a three shot win. B Grade was tight and torrid with all three leaders dead level off the stick with two holes to play.  They all had a six on the par 5, 17th so, just the last hole to decide the day.  The 360m par 4, 18th is rated the most difficult hole on the course.  Scott Williams pulled his drive into the trees but after two other excellent drives followed by good approach shots it was down to two competitors, John Freestone and Rob Rea were on for four with shortish putts for a one over five.  John, he of the steely nerves, dropped his putt throwing all the pressure onto Rob.  Rob’s putt just lipped out to give John the one stroke win. In C Grade, that cagey veteran John Laing just couldn’t quite keep up with the lower handicapper Dave Richardson. Dave went on to claim an eight stroke win.

The day was notable for many things  but perhaps the most important was veteran Peter Scanlon completing his 61st consecutive Club Championship.  Thanks Peter, you are a great inspiration to us all.  There were also two excellent  performances across the three days with both Mal Mottram and John Freestone playing to their handicap each day, very consistent golf and difficult to achieve on such a tight course and under the pressure of the Club Championships

After the round everyone enjoyed a very relaxed dinner, (thanks Wilko and Andrew Laing) then cheered on the day’s winners and the winners of the various awards from 2018.  RGC vice president Kevin Dunn presided over the presentations noting many of the club’s achievements during the 2018 year and then thanking the very many people who had worked so hard to improve both the golf course and Romsey Park in general

The 2019 Men’s Championships final results were; 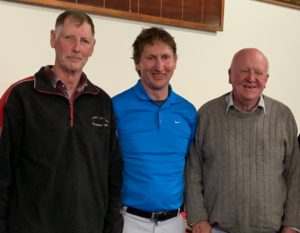 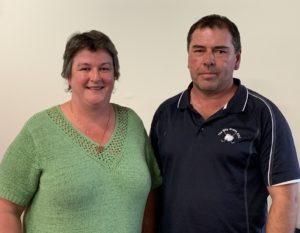