Mal, Tony and Sevi were on the job.

This drain heads east taking storm water from the tennis and netball courts and the recreation centre it then  turns north and picks up additional water from around the cricket nets and the main oval as it moves towards the north, passed the men’s 10th tee, behind the 1st green and finally empties onto Barry Road. Over the years this drain had become heavily overgrown and flow of water had been reduced to a trickle.

Tony set about cutting back low branches, blackberry plants and smaller trees that had grown in the drain.  Mal took on the removalist’s job, dragging all the material away from the drain. Sevi then  joined in as all three shovelled or raked the drain clear of oak leaves, twigs etc.  Plenty of cuts and scratches to share around, blackberry does not appreciate being disturbed!  After all that work water could still not flow out to Barry Rd, a cut was made allowing it to flow out onto the track behind the 4th green.  That flow was redirected into the new drain on the course or back into the drain behind the 1st green and then on to Barry Rd.

The area of ivy, poplars and blackberry to the Nth of the 12th tee and behind the 4th green was so overgrown that it was impossible to get in and clear the drain.  Perhaps the simplest and cheapest way of getting the water moving, without running it back onto the golf course, would be to divert the drain behind or to th front of this overgrown copse to join up with the drain to the Sth of the men’s 10th tee? 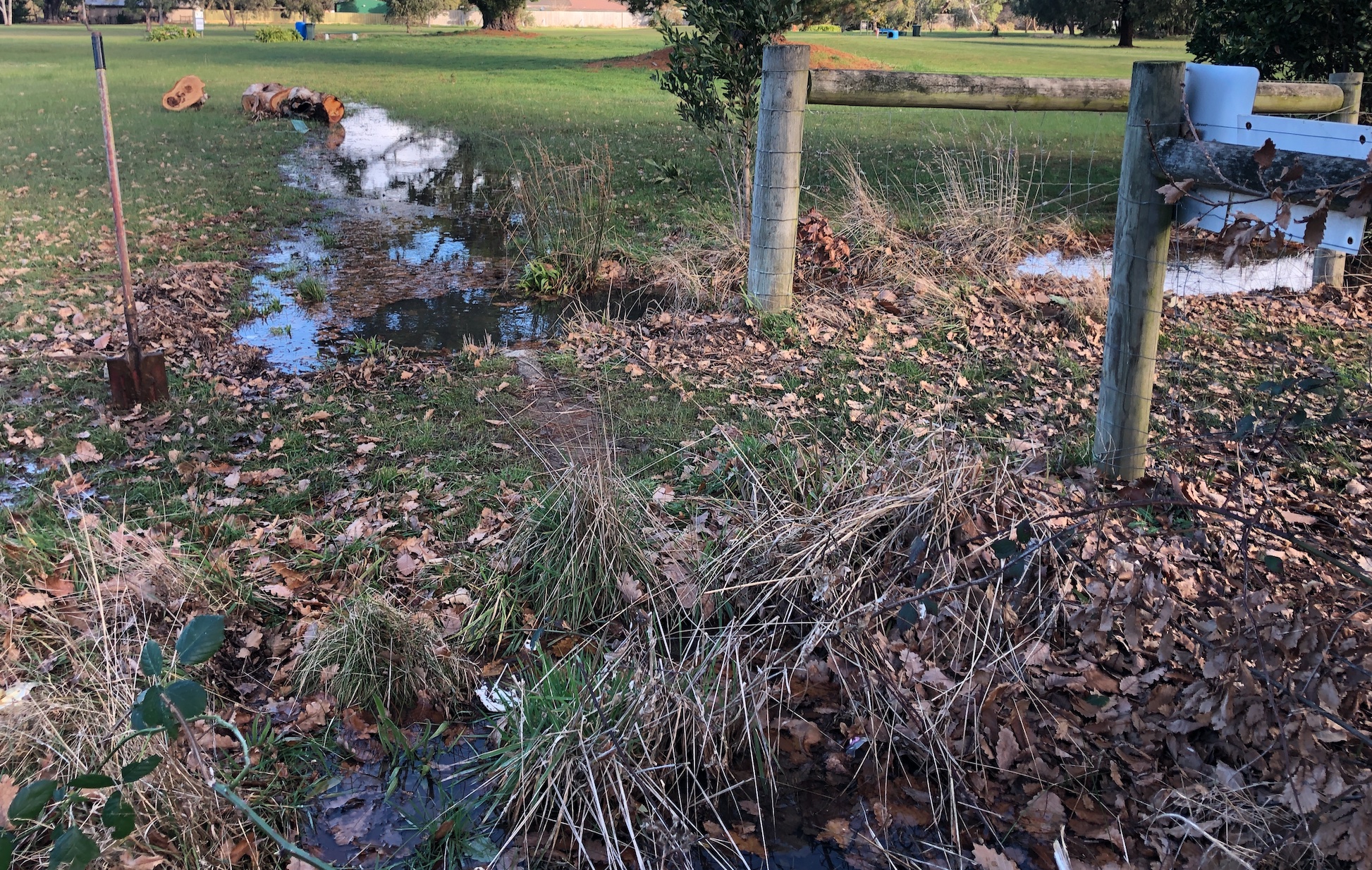 Overgrown southern end of the drain 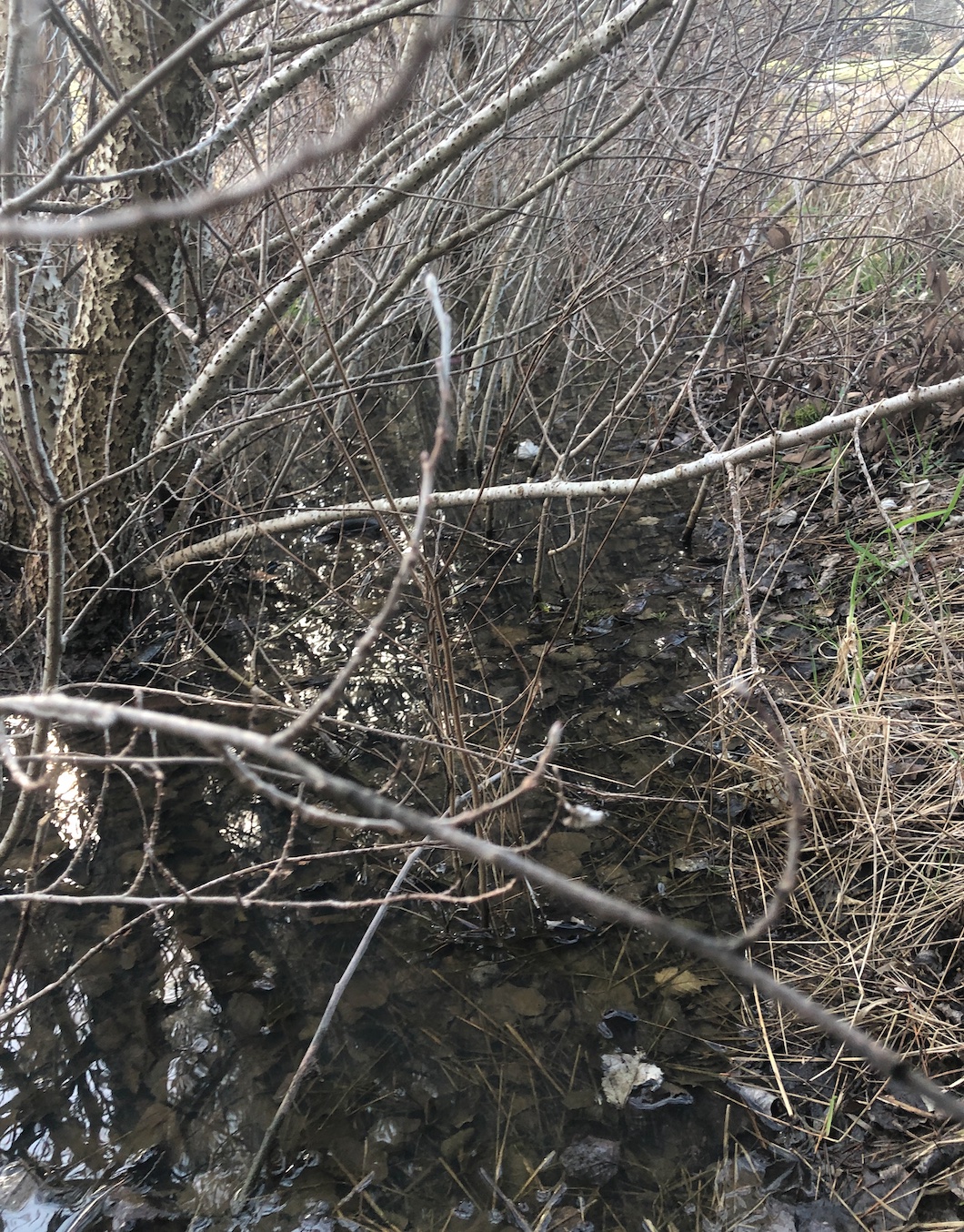 Tony cuts and Mal removes the branches, blackberry and small trees from the drain 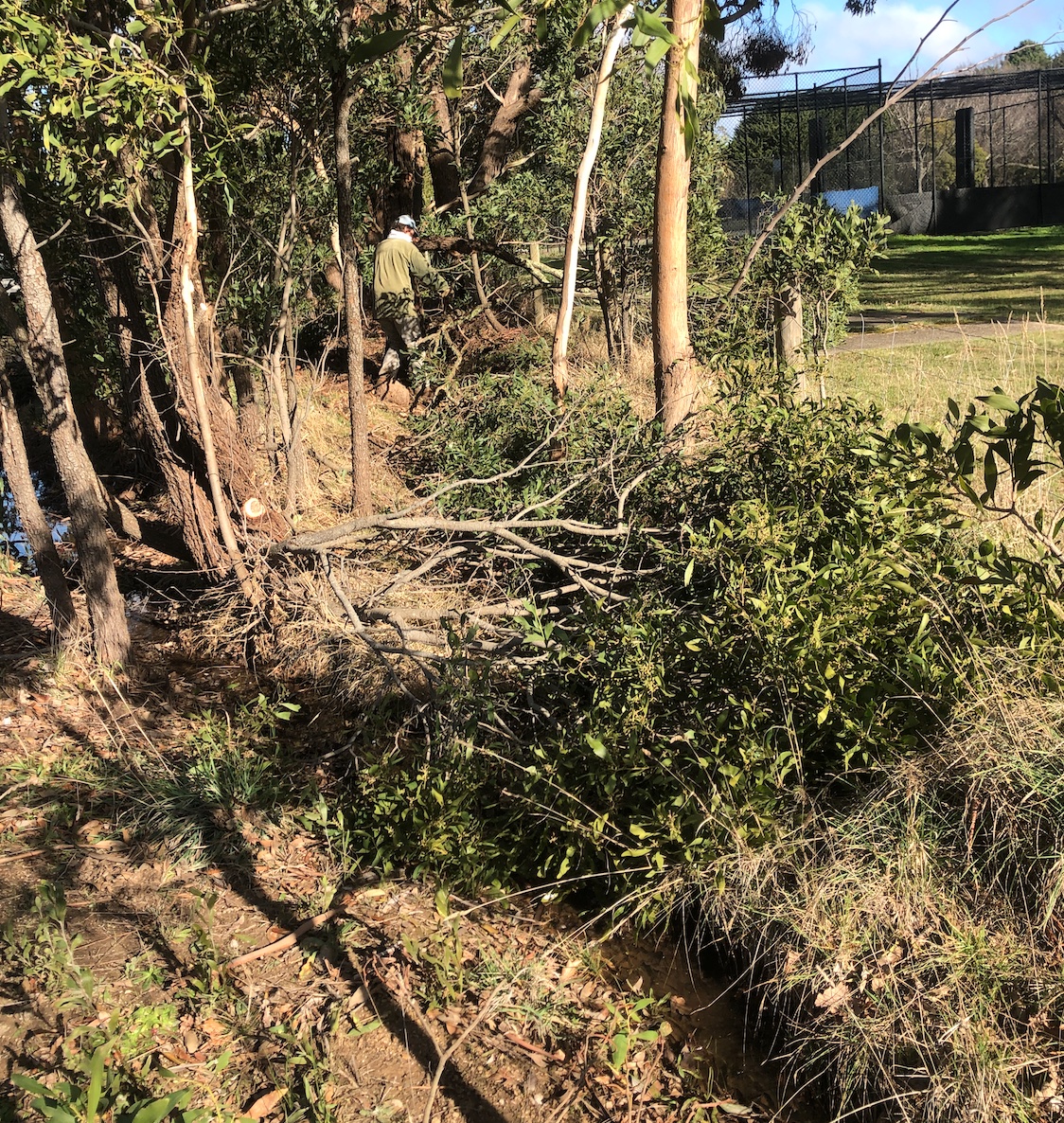 Sevi rakes the leaves and other detritus out of the drain 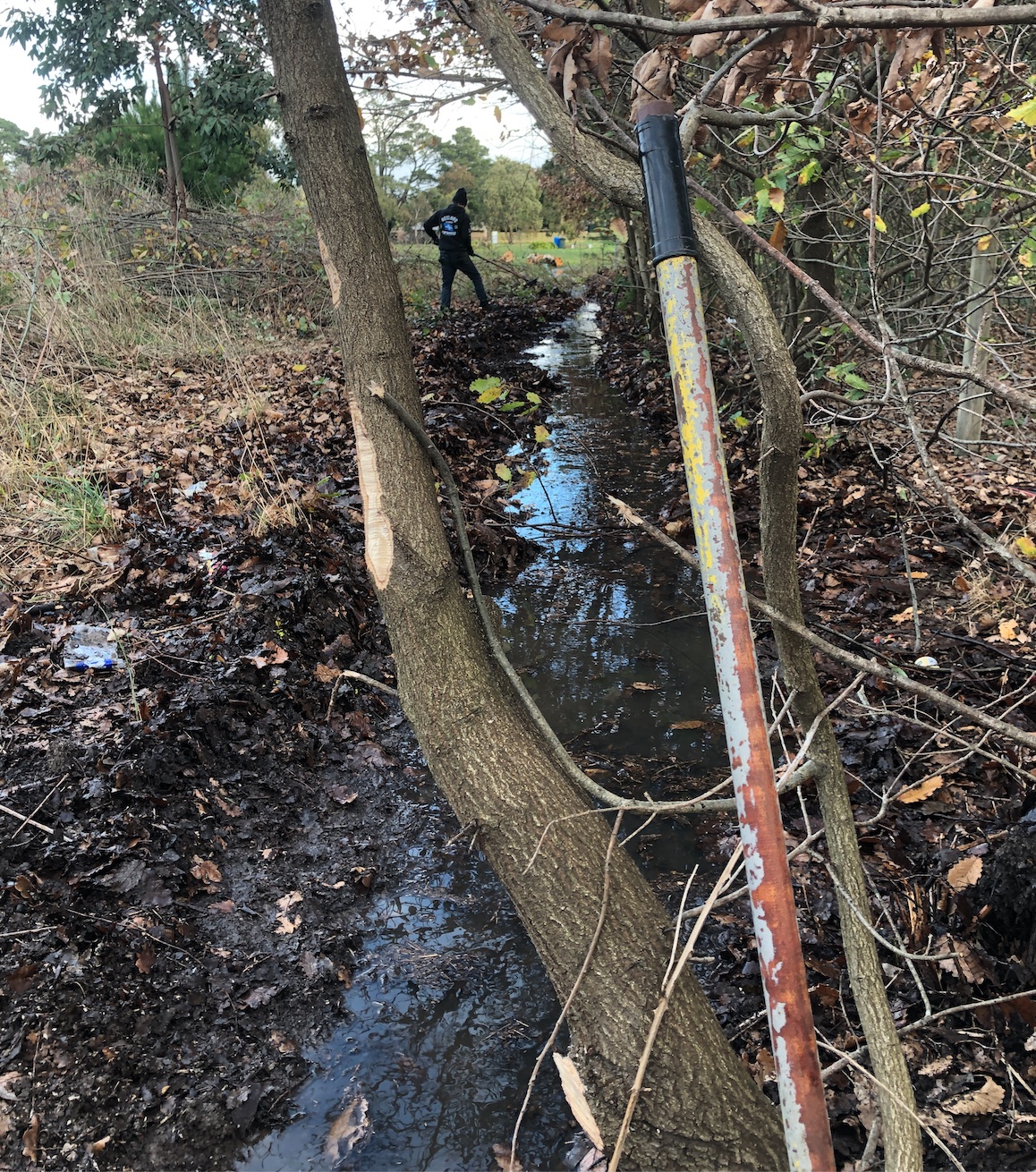 Storm water diverted from the clogged area of ivy, poplars & blackberries onto the golf course behind the 4th green 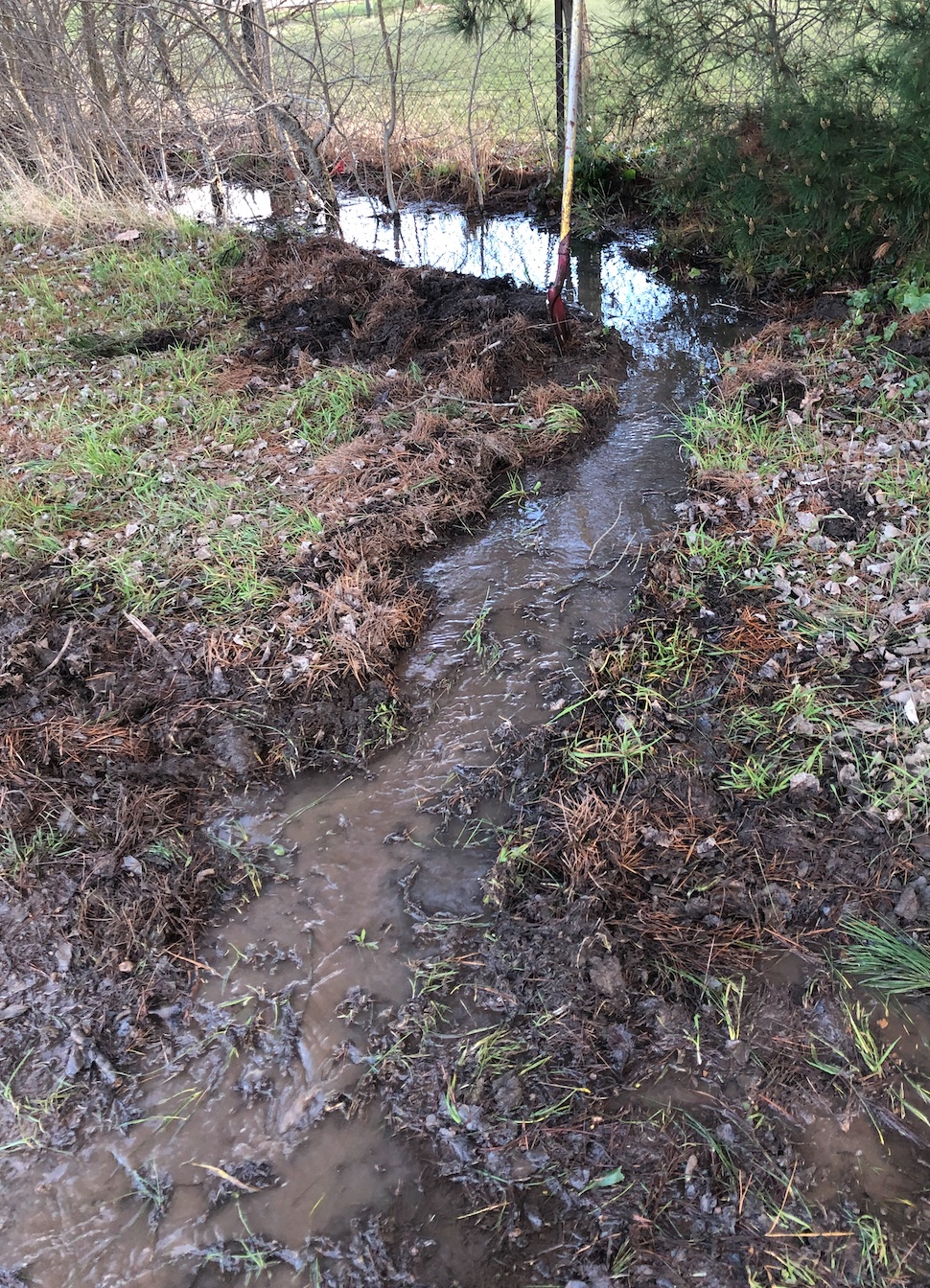