Seventeen teams lined up in the Romsey Golf Club/Puddle’s Team annual Charity Golf Day, proceeds to the 2018 Lancefield/Macedon Ranges Relay For Life.  Club members had been out on the course early in the morning repairing the damaged greens but as soon as they moved on the corellas descended to continue wreaking havoc.  Players assembled and there were plenty of good natured challenges in the room before hit-off; one really stuck with two teams agreeing to donate $250 to either “Puddles Team” or “The Lindenbury Lappers” depending on their performance on the day.  With team names such as “The Rough Boys” (did spend a deal of time in the rough!) “Old Laing Syne”, “Romsey Redhacks”, Boyco’s Bandits” and “Nearly Dunn” it was always going to be a fun day.

A shotgun start at 10.00 am had everyone out on the park and the course soon echoed with  shouts of joy as birdie putts dropped or groans of despair as shots stopped just short of the cup.  Soon the pressure mounted, each player had to record the required number of drives, and there were some very unusual “best drives” over the final few holes.  Amazingly, the shotgun start had the two top teams passing each other over their final hole.  One had to par and one had to birdie to stay even.  It was high pressure golf!  Soon enough it was all over and every one was heading back to the rooms or a relaxed lunch, a quiet drink and a chat as the cards were checked and scored.

As the scores were posted there was a late protest from members of Boyco’s Bandits and  respected local negotiator and counsellor, Dave Bentley Esq., was called upon to hear the evidence.  After due consideration Mr Bentley ruled that the protest had no grounds.

RGC president, Anthony Lakey thanked the members of RGC who had worked so hard to prepare the course, organise registrations and work the bar, the members of Puddles Team for their sterling work preparing and serving the food, Nick and all the team at Romsey Hardware who had supported the day and donated all the prizes and, finally, all the day’s players and visitors who had made the effort to organise a team and play in the event.

RGC captain, Scott Williams had the challenging job of choosing the Best team Uniform and while there were a few good efforts from “The Rough Boys” and “The Blues Brothers” it was a tight battle between “Cannonballs (Lederhosen – an interesting choice on such a warn, still day) and eventual winners “The Flatstickers”

The day’s results were; 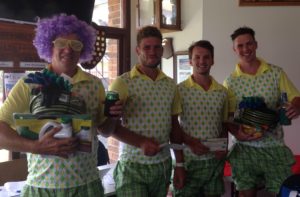 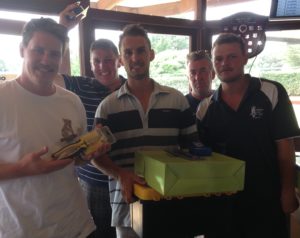 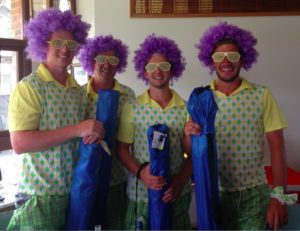 It was a very successful day; everyone enjoyed the golf and catching up with friends and over $2,000.00 was raised for  cancer research.