The final round of the 2017 men’s championships had everyone looking to B Grade for a close result.  In A Grade Dean Jones seemed to have it pretty much sewn up.  The recent warm, late autumn weather saw the course in excellent nick and, despite the 10mm of rain over night, conditions remained fairly consistent for the three weeks of the championships.  The day began under cool overcast skies but gradually the sun came out and the afternoon warmed.  Again the colder air and the soft fairways saw everyone lose distance off the tee but the greens were holding well so well played approach shots held on the greens,  The temporary green, on the bird damaged 16th, was a bit of a gamble and all players really needed to putt with confidence, par on this hole was an excellent score.  Despite a  number of players putting in good front nines one golfer, playing well under his handicap, jumped ahead and was able to hold his nerve to record an excellent win. On a still, cool day the results were; 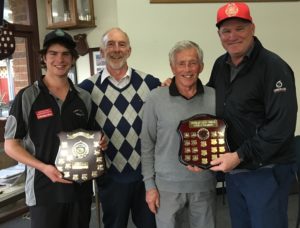 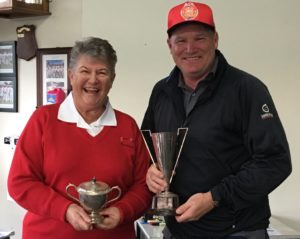