It is with great sadness that we learned of the passing of Peter Mitchell.  Peter, who began playing golf in the late 1950’s, was one of the many Mitchells (dad Algie, mum Phyllis, brothers  John, Stephen & Max and Aunt Margaretl) who graced our club and course.   Peter was a player of great talent who possessed a wonderful temperament, he will also be remembered for his competitive nature, especially when the game was close.

The winning pennant team of 1973 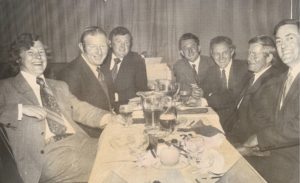 Besides being a great farmer, talented sportsman and keen (and very productive) gardener, Peter was also an author of note.  He wrote many local historical articles for the community Newspaper “The Romsey Rag”  and was  a major contributor to two books on the local Shire  and a detailed history of Romsey; “Romsey: A veritable Garden of Eden” and “When Memory Turns the Key” Peter was an active in the historical society, the former Romsey Shire Council (three terms as a councillor), the Romsey Water Trust, the Romsey Sewerage Authority, the Lancefield Cemetery Trust, the Rotary Club, Romsey Primary School, the Scouts the  Romsey Golf and Bowls clubs, Rotary and Romsey Uniting Church.  Peter’s work within the community was recognised numerous times, the most recent being the RSL “Anzac Spirit” award in October 2018.

Following his retirement from the golf, Peter maintained an interest in the club’s progress. He enjoyed reading the weekly golf results and hearing current golfing stories from friends.  Peter was a wonderfully positive man who saw the good in everyone, he will be greatly missed.  Our condolences to Margaret, David and Sally and their families.
Multiple RGC champions Ken Newnham & Peter Mitchell 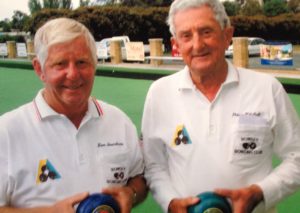