The field assembled with conditions looking very promising, a little sun, clear sky and virtually no wind however, as the groups headed off to the tees, the cloud cover came in and the temperature dropped.  After a few holes the skies cleared and it was a very pleasant afternoon.  The rain earlier in the week meant that fairways had not been cut and the rough was heavier than usual causing many problems for any who strayed off line.  Heavy fairways and cold air saw longer than usual approach shots but, once on the green, players had to be careful as the greens were again faster than usual for RGC.  The “Relative Pairs Shield” looked to be a battle between the Scanlons, the Robbs and the Laings.  The Liangs had tasted success a number of times in the past and the hunger was still there.  In the men’s competition uneven numbers made for a few unusual pairings.  Four pairs had wonderful front nines but a good back nine was needed to take out the day and it was down to the final two holes before the eventual winners were able to break clear.  The day’s results were;

The day raised $105 for the Drummond Golf “Golf 4 A Cause” program, this program supports cancer research. 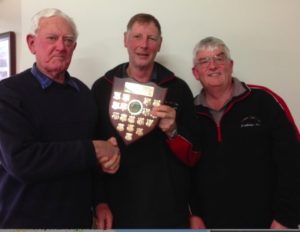