Heavy rain over the during the week saw excellent fairways and greens however, the course had softened appreciably and it looked as if the longer hitters were going to gain the advantage.  The round began under clear skies with virtually no wind but the humidity was quite high so the air was a bit thicker than expected.  The Par field made light work of these obstacles with a number of players carding excellent scores.  There were a number of birdies on the Par 5s and a very near miss for an eagle on the Par 4, 3rd.  Conditions for the John Laing Shield Final looked to favour Mick Nicholls Jnr, a consistent, long hitter but the pressure of a matchplay final can change the whole game.  Mick drove well but John’s ability to find the middle of the fairway, his excellent approach shots and a top short game around the greens made up for any lack of distance off the tee.  In the end it the final a bit of a fairy tale ending with 83 year old John Laing taking out the shield named in his honour.  On a steamy, sticky day the results were; 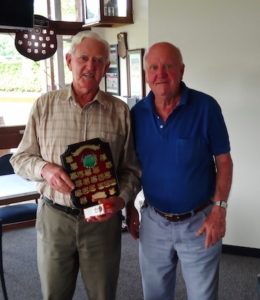 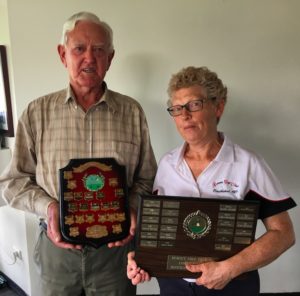