Menu
Flatstick Summer Cup Part 2 of 4th and final round
A strong field of both men and women teed off in the February Medal and the last round of the 2017 Summer Cup.  There was a gusting wind from the SE at the beginning of the day, this changed to the SW for the latter half of the round.  Most players had great difficulty controlling drives and high approach shots as the wind played havoc with any ball that was not “straight down the middle”.   A few felt they had blown their chances with a poor front nine only to card an excellent score down the back nine to bring them back into contention.  In the end it down to one of the club’s classy veterans and one of the club young guns to fight it out.  Among the women it was also a close race with the winner getting up by one shot.  On a warm, windy day the results were;
Men’s February Medalist; Shannon Wright – 84/15/69 from Les Gaunt – 77/5/72 and John Moody – 86/13/73
Women’s February Medalist; Darlene Baker – 101/25/76 from Elaine Scanlon –  110/33/77
NTPs; 15th – Darlene Baker, 16th – Mal Mottram
Least Putts; Peter Scanlon – 24, Kath Jekabsons – 29 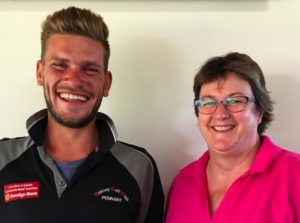