Greg, Liam and Jake (Turf Conditioning Services)  arrived at 7.20 am to be let in by Tony.  A careful trip down to the shed and the machines came off the truck.  Ron Walker arrived at about 7.30am closely followed by John Freestone (Freebie) and Andrew Clement with that wonderful tractor.  By 8.00am coring, loading sand and topdressing was on at a feverish pace.

Steve Wilkins (Sevi) rolled in at about 8.30am and with Bob McL set about scarifying the practise green.  Did a great job, Sevi’s patches of green house grown bent grass have taken well. Sevi then set about giving the rough a bit of a “touch-up” while Bob headed off to chew his way through the fairways.

Ron, Freebie, Tony and Clive Mensforth set about clearing lower and dead branches near the 2nd green and between the 2nd and 3rd fairways; far easier and safer to mow now.  A few more branches to add to thge two piles.

Hugh Drummond rolled in and began organising the bent grass seed and fertiliser ready to put out after the first smudging.  We had to wait through a few light showers for the sun and wind to dry the sand so that it would smudge into the core holes, by about 1.30pm all as good.  Scott arrived at about 1.30pm to help with the smudging of the greens.

As the morning progressed Andrew filled the spreader with sand and then pushed up the piles so we could burn off.  He then headed back to fill the spreader again.  Once the coring and top-dressing had finished Andrew went about picking up any stumps or other roots or branches and dropping them onto the piles.  Later, as the piles burned, he pushed up the edges of the fires so that all possible detritus could be burned.

Wendy Gosden and Darlene Baker hit the shed at about 11.00am to sort out the BBQ and Elaine turned up with some liquid refreshments.  Wilco gave the BBQ the “once-over” making sure all was clean.  Lunch and afternoon tea were top notch, thanks Wendy and Darlene. A few thanks were offered to Elaine at the end of the day as a well earned drink (and a cold snag) was enjoyed.

After lunch Hugh and Clive began seeding and fertilising the greens, we gave it another hour then Ron and Freebie did the second smudge to drop as much seed and fertiliser as possible into the new core holes.

All in all a  great day for the course and club.  Thanks to all those who put so much effort into making the day a success. 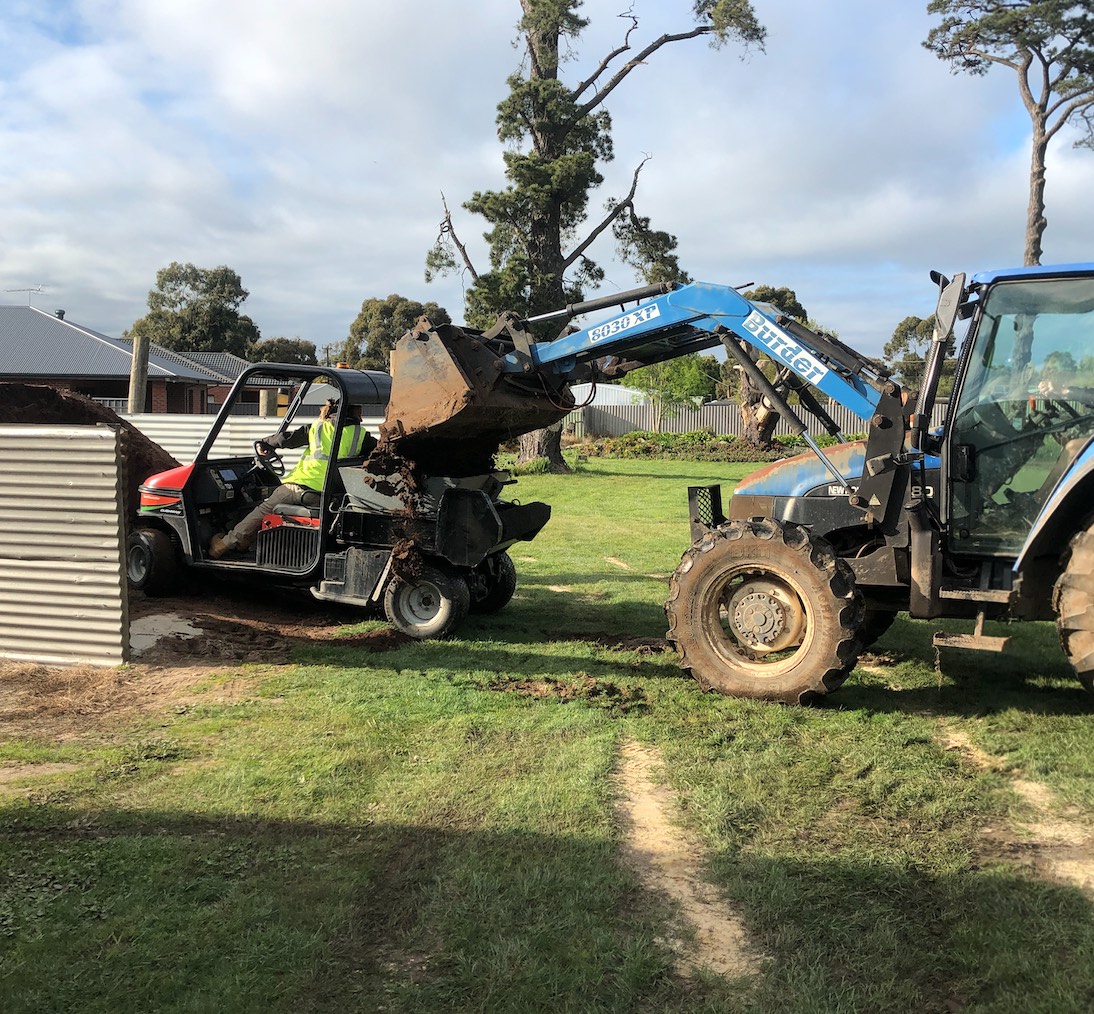 Wendy and Darlene did a great job with lunch. (loved the muffins/slices Wen) 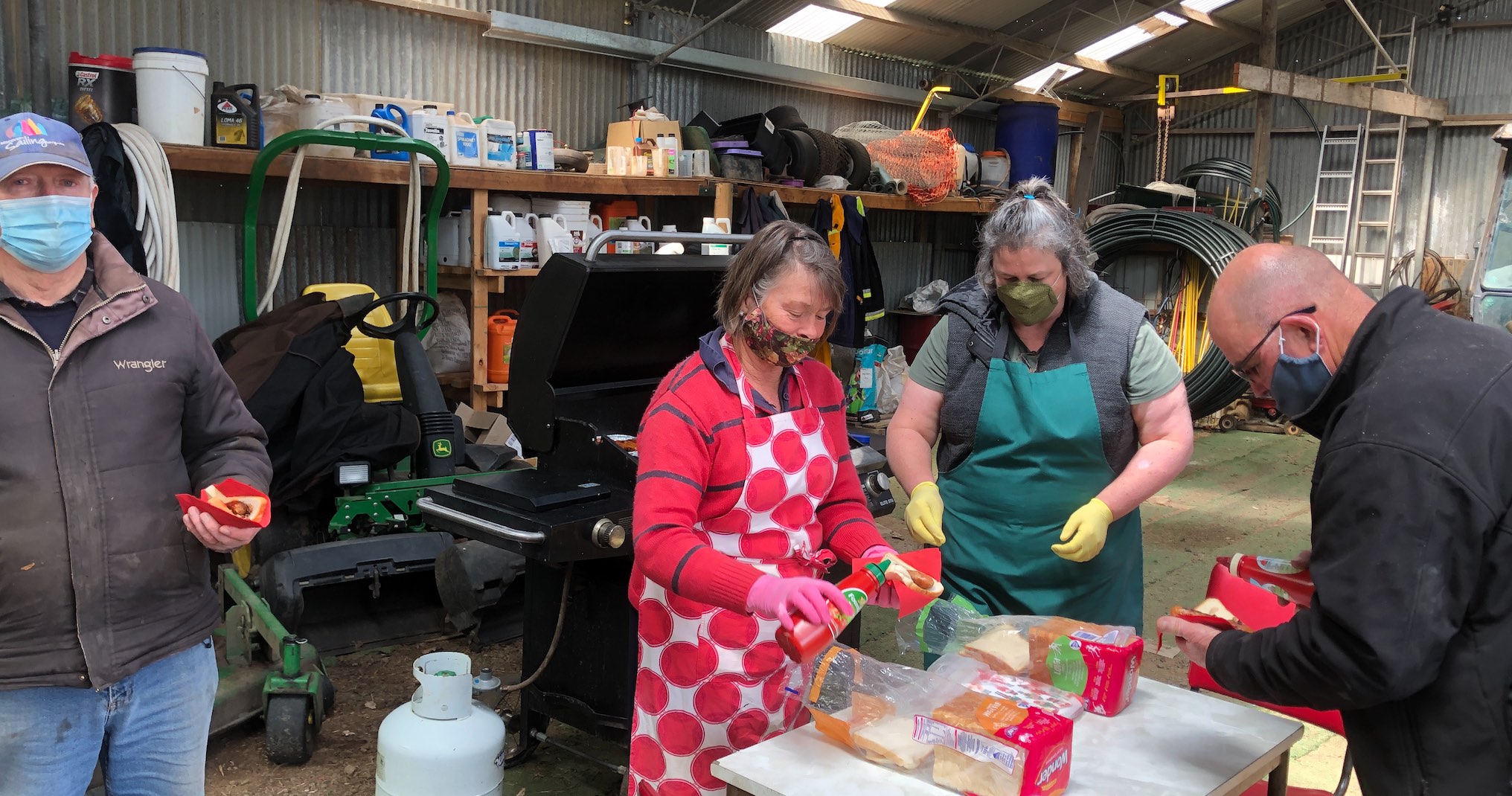 Ron smudges in the 9th 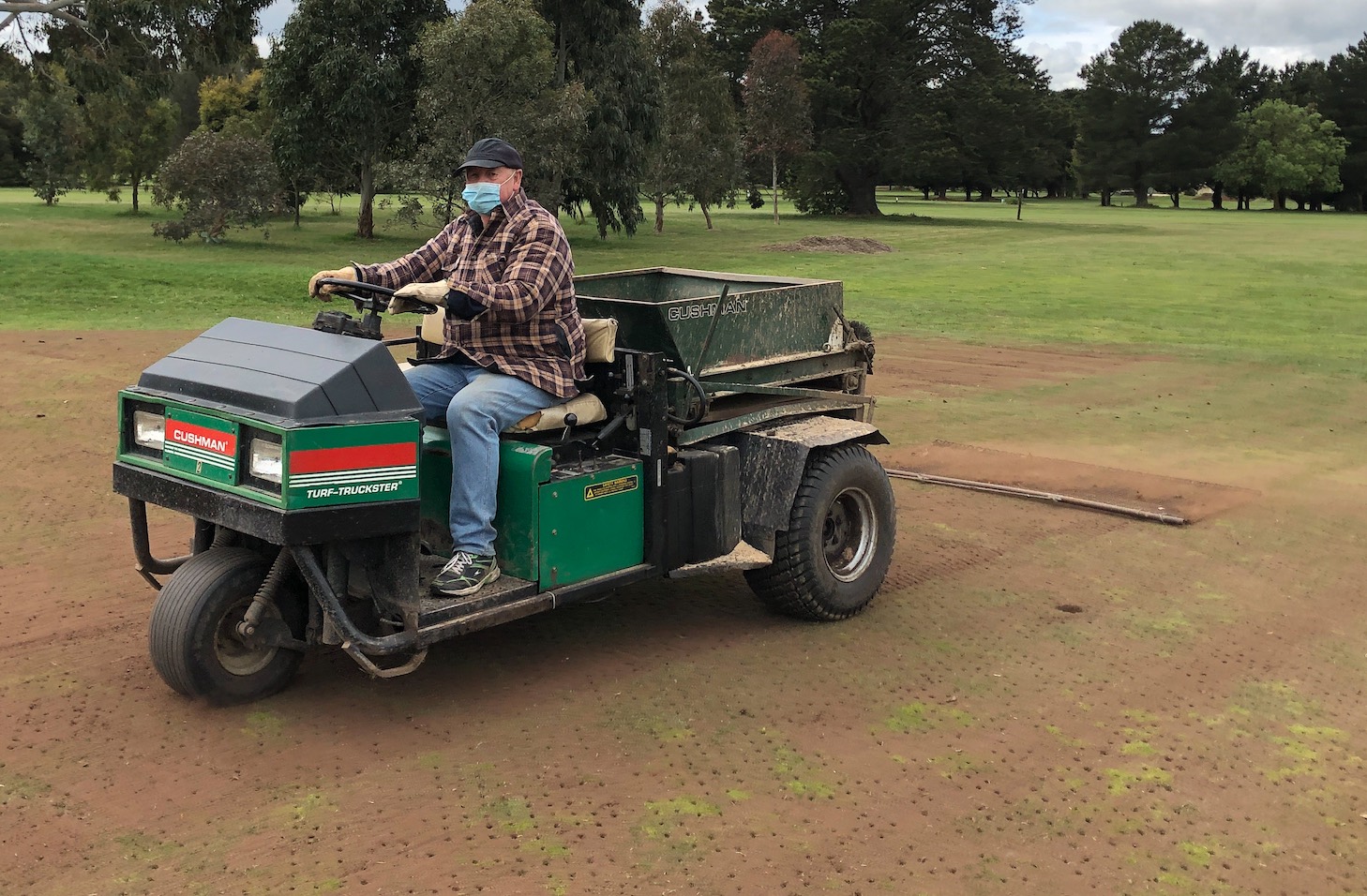 Hugh and Clive prepare the fertiliser and bent grass seed 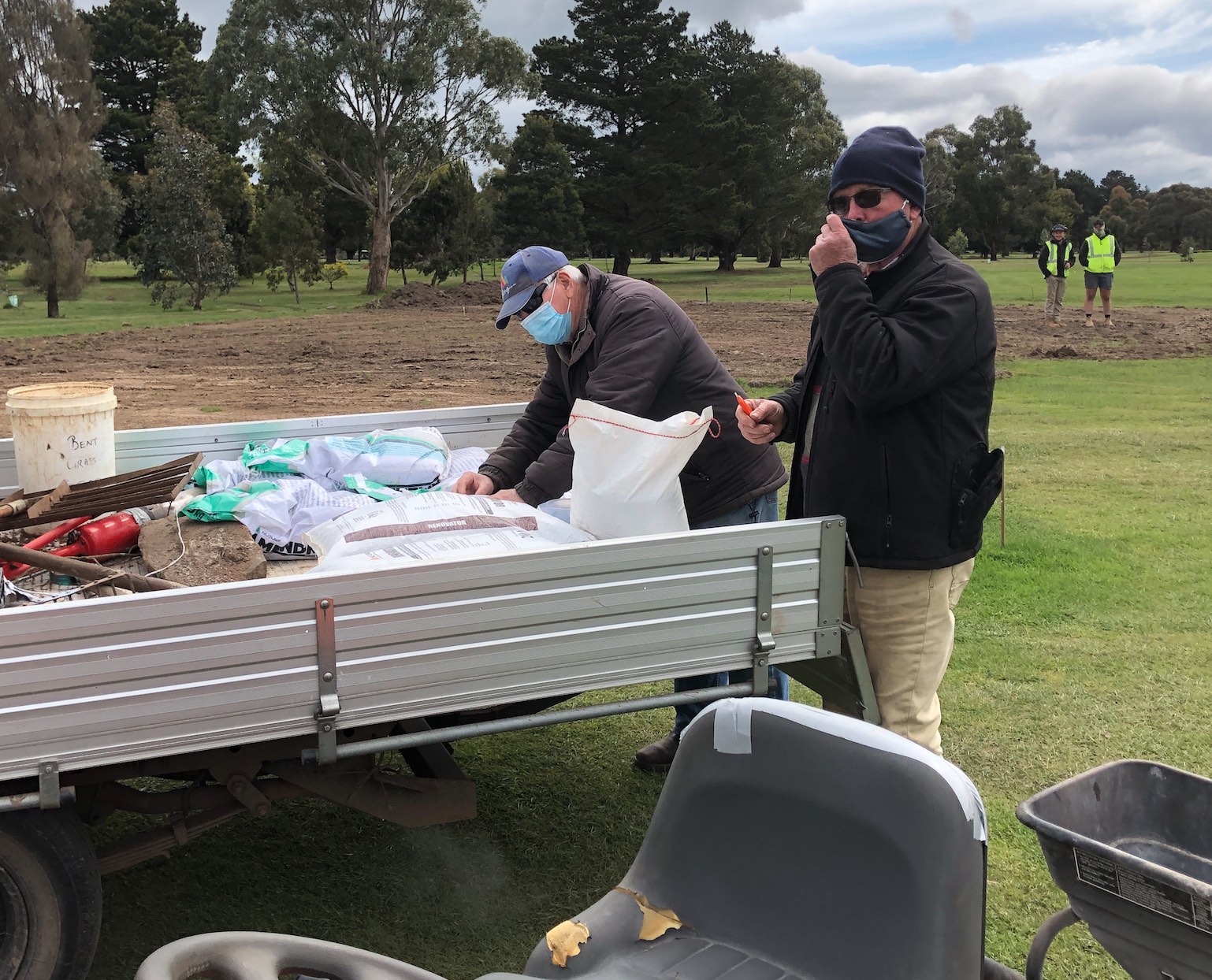 Bob knocks down the 8th fairway 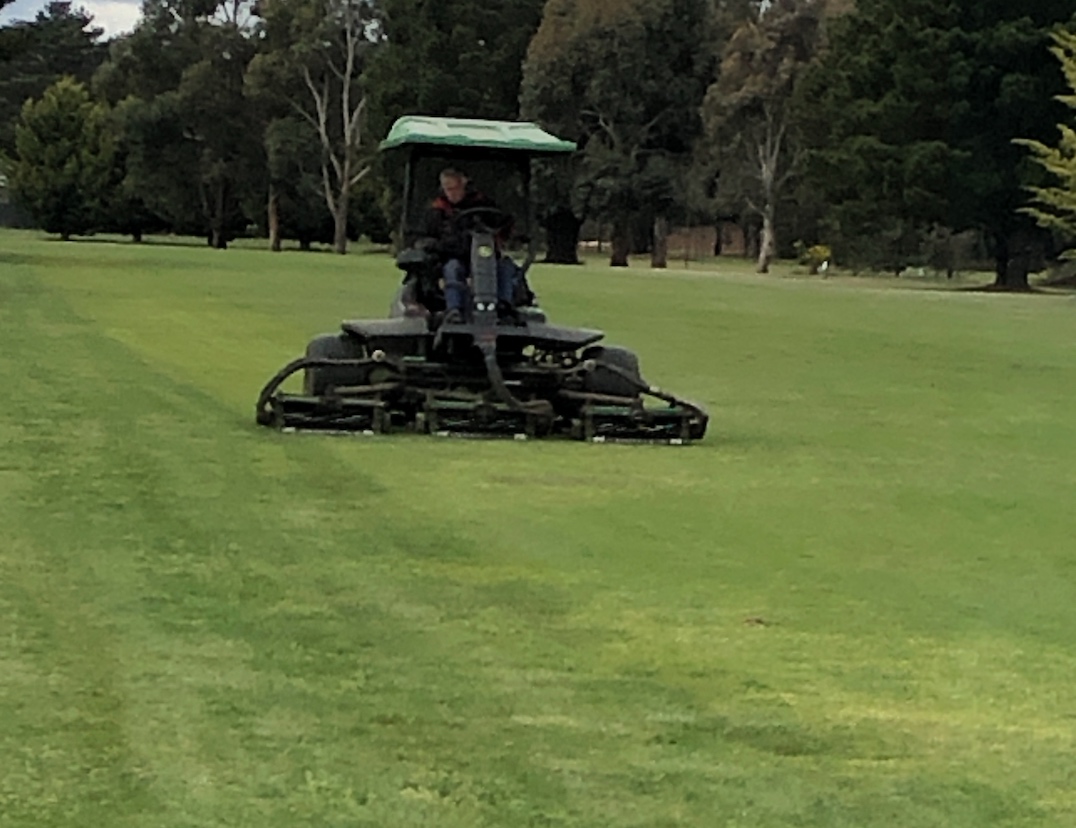 Andrew cleans up the tyre marks around the sand bin 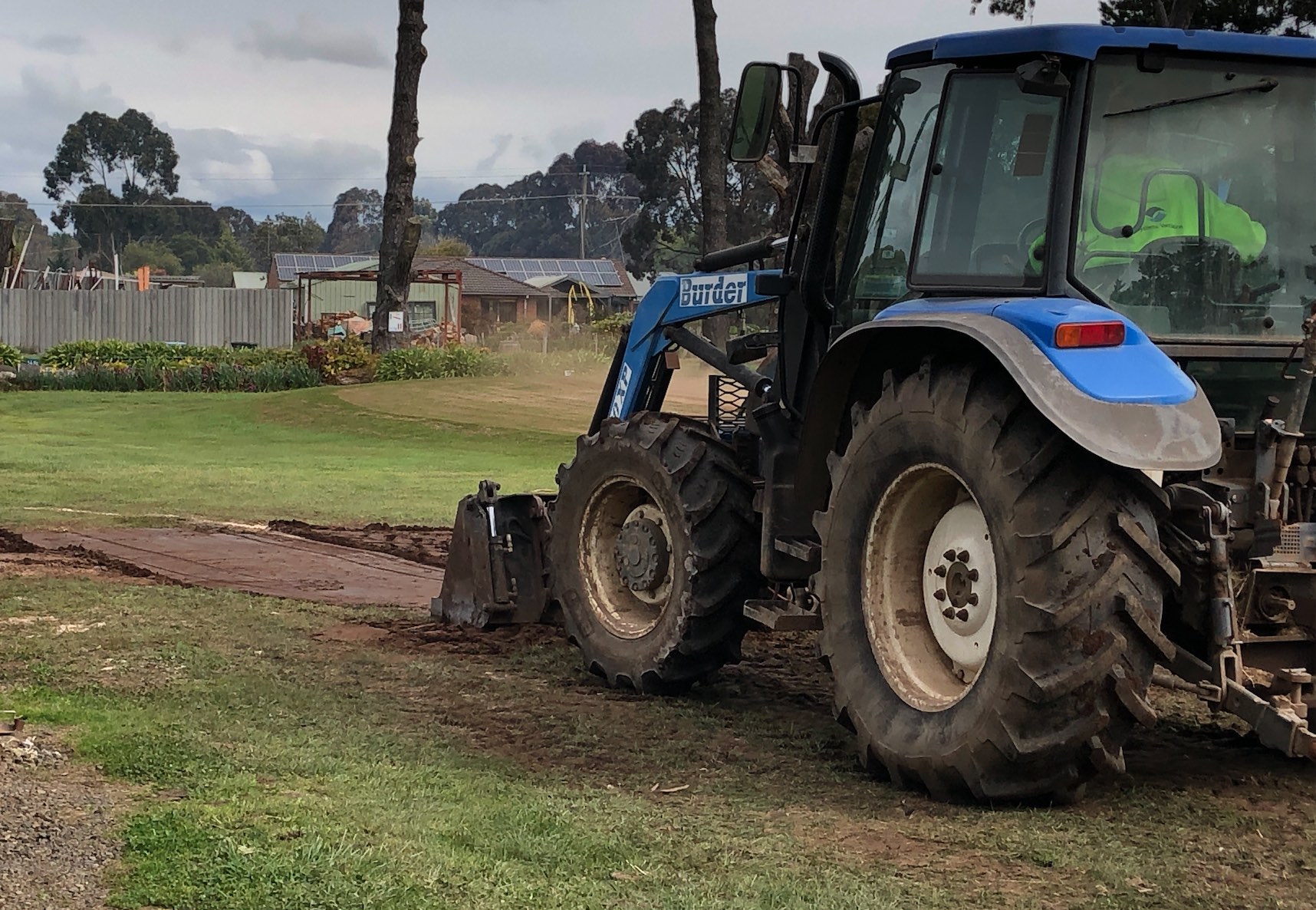