Play began on a very cold afternoon, there were over cast skies and a gusting northerly wind.  The recent rain had again softened the fairways and greens however there was still some growth and all fairways had good cover.  The final of the W. E. Tom looked to be over after the first nine with Freeman picking up wins on 1, 3 & 4 and McCarten chipping in with a win on 6.  Freestone & Nicholls were not downcast and proceeded to pick up the 10, 11 & 12 to be one down with six holes to go.  It was then that youngster McCarten turned on the heat winning 13, 14 & 15.  With 16 squared McCarten/Freeman had won the day.  The Par competition got under way about 20 minutes after the 4Ball Final.  The gusting wind moved balls in the air, some players seemed to hit off just as a gust blew in while others seemed to get the quite spots and see their ball sail fairly true.  It was a tough day and anything approaching square was a good score.  On another, windy, chilly winter’s day the results were; 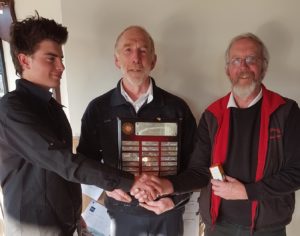