A series of works were planned for the day.

Lorraine Robb did a great job here, much work over the week preceding the Working Bee.

Twig was straight into it.  He sorted out the scarifier and headed off to scarify all the tees.  Forget loading the machine into a trailer and driving between tees, it was a nice day for a walk.  A good crew of workers followed Twig around and raked the tees after he had finished scarifying.  Bob McL, Bruce Robb, Hugh and Kev all worked hard to get this done

Twig was a “man on a mission”. 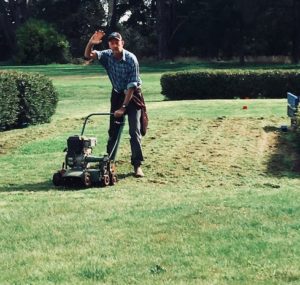 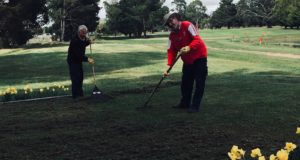 Again, Lorraine did a great job here.  Her task was made a little easier as Kath Jekabsons had been around the course a few months ago and repainted any of these markers that need a “touch-up”.

Safety Fence Behind the 3rd Green

Kev and Tony headed off to tackle this job.  The top wire was already in place and the outside posts were stayed back, putting up the top run of mesh was a bit tricky and it took a deal of time to get everything tight and in line.  It rapidly became apparent that we would need more mesh so there was about a 30 min wait outside the Hardware store who were opening at 10.00 am on the Grand Final Public Holiday.  Peter Scanlon turned up to offer assistance and sound advice as the second run was put in place and the ends trimmed and stapled.  The mesh was then clipped to the supporting wires.  A shorter, 3rd run of mesh, was added on the northerly end.  All in all a good effort that will help reduce the number of balls that fly into the neighbour’s yard.

The 1st run of mesh was a bit tricky. 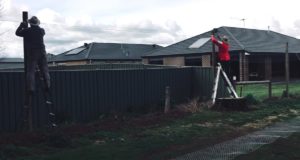 Seeding and Top Dressing The Tees.

What a mob of wackers!  They certainly had a great time, loading the ute and cushman with sand, seeding and top-dressing the tees and then raking/smudging and levelling many of the tees.  A great effort from Freebie, Ron, Scotty and Rob Rea (Tony joined in for the last few tees).  A few more tees to be finished off during the coming week.

The cushman did a wonderful job 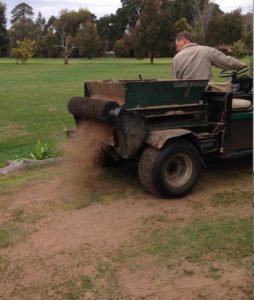 This mob really enjoyed their time. 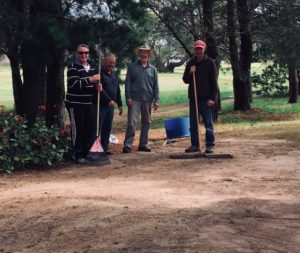 Lorraine, Wendy and Kath took this task on and made sure that all seats were sanded back, undercoated and painted.  A great effort.

Elaine again rose to the occasion with a sumptuous morning tea and a great lunch.  Everyone had a bit of a sit-down and a chat.

Everyone had all they needed. 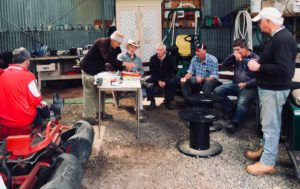